Being color blind presents some challenges to pilots hoping to obtain a medical certificate and be permitted to fly.

The good news is that you can be color blind and still be a qualified pilot, though your medical certificate will contain the limitation of not being able to fly at night or by color signal controls.

For many pilots, especially those who would like to obtain a first-class or second-class medical certificate and fulfill their dream of becoming an airline pilot, or operate as a commercial pilot, this isn’t much consolation.

According to AOPA, considering that up to 8% of men and 0.5% of women are colorblind in the U.S., this spells bad news for aspiring pilots who want to work in a paid role.

Thankfully, there are ways of obtaining unrestricted FAA medical certification through testing that is not usually available from Aviation Medical Examiners.

Whether being color blind will be a limiting factor in your goal of becoming a pilot will ultimately depend on the severity of your condition and the test you take.

Can Pilots Be Color Blind?

According to FAR Part 67, “the ability to perceive those colors necessary for safe performance of airman duties”, is required to obtain either a first-class, second-class or third-class medical certificate.

This is quite vague, which is a good thing if you are color blind and want to become a pilot.

A Private Pilot License falls under a third-class medical certificate.

If during your FAA physical exam you fail the pseudoisochromatic color plate test, your medical certificate will be issued with restrictions. Your certificate will read “Not valid for night flying or by color signal controls.”

If you would like these restrictions lifted you can take an alternative FAA-approved test, as listed at the end of this article. If successful, all restrictions will be lifted.

Keep in mind, though, that the same test will have to be taken every time you need to reapply for a medical certificate.

If you fail one of the alternate tests, you will be required to take an operational color vision test (OCVT) that consists of a signal light test and a practical test.

If successful, you will be issued with a 3rd Class Letter of Evidence.

While this means that any color vision limitations will be lifted, you might not be able to obtain a medical certificate that is higher than third-class.

A Commercial Pilot License falls under a second-class medical certificate.

If you fail your original pseudoisochromatic color plate test as well as one of the alternate tests, you must pass an OCVT test. A color vision medical flight test (MFT) must also be passed, which is an actual flight test. More has been written about it below.

If you pass both the OCVT and MFT tests, a Letter of Evidence will be issued that is valid for all medical certificate classes with no flying limitations.

When it comes to color vision, the exact same requirements as a second-class medical certificate must be met.

We realize that the process can get a little complicated in writing, so refer to the following flowchart to see how the color vision testing process works. 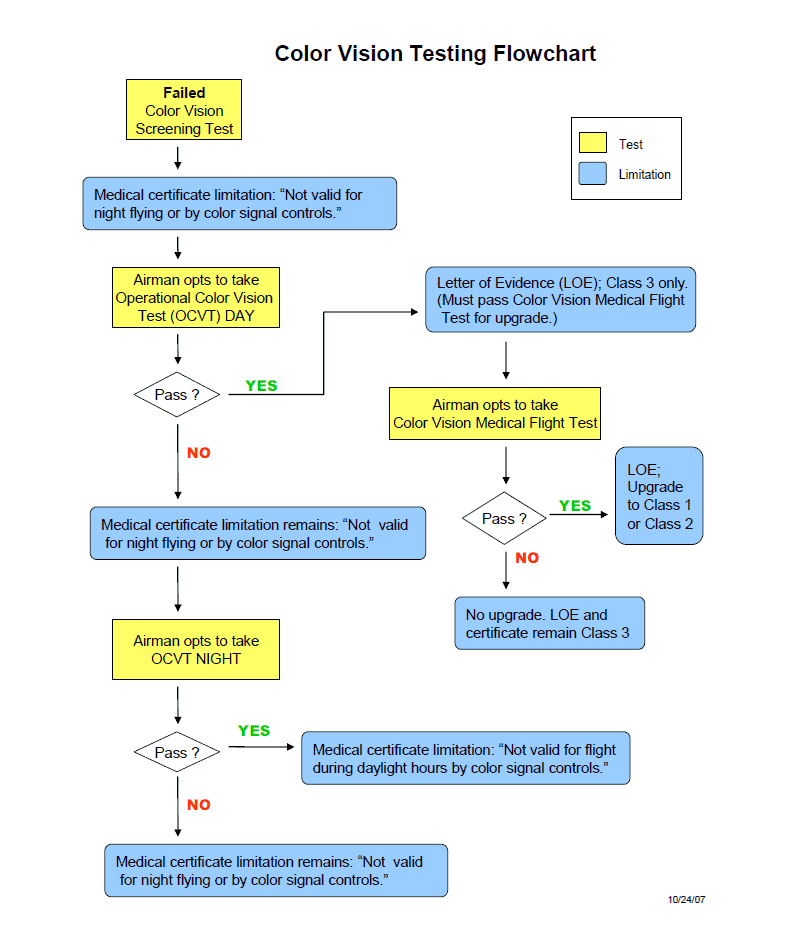 Why Can’t You Be a Pilot If You Are Color Blind?

For example, pilots must be able to read and correctly interpret aviation instruments and colored displays, warning or caution lights, and marker beacon lights.

Terrain and obstructions, especially under marginal conditions, must also be recognized, along with obstructions.

Aeronautical lights such as those from other aircraft in the vicinity, runway and taxiway lights, red warning lights, and airport beacon lights must also be easily discernible.

These are just a few of the types of information that are conveyed using color and must be easily recognized by pilots.

There are several more we have not mentioned, but in any case, it is clear that pilots possessing excellent color vision is of the utmost importance for safety.

The medical flight test (MFT) involves testing for these things.

According to the FAA, color vision correcting lens can not be used to correct color deficiencies. This includes pilot sunglasses.

Can pilots obtain a PPL (Private Pilot License) if they are color blind?

As mentioned above, a Private Pilot License falls under a third-class medical certificate.

This means that even in the event of failed Operational Color Vision Tests, a certificate can still be issued, though it will contain the limitation of not being valid for night flying or by color signal controls. Steps can be taken to get this lifted.

Can you be a pilot in the Air Force if you are color blind?

If you are color blind and hoping to join the Air Force as a pilot (or in any other flying role), unfortunately, you will be unable to do so.

Additionally, as you might expect, the Air Force has some of the most stringent other vision requirements for pilots in aviation.

Can military pilots be color blind?

If you are hoping to join the military as a pilot, unfortunately, you will be unable to do so.

For pilots who are color blind, the most common type of color deficiency is red-green.

Blue-yellow and complete color blindness also exist, though they are much less common.

Similar to short and far-sightedness, color blindness exists on a spectrum.

During an FAA medical exam, an aviation medical examiner (AME) will likely use the FAA recommended Richmond HRR (Hardy Rand and Rittler) pseudoisochromatic test to see if a pilot experiences any color deficiencies

However, alternative FAA-approved tests can also be taken. If passed, there will be no restrictions with your license.

Tests approved by the FAA include:

Acceptable Substitutes may also be used, provided directions accompanying the instruments are followed. These tests include:

Other tests like the Farnsworth Lantern Flashlight, yarn tests, and the AME-administered aviation Signal Light Gun test are not acceptable.

If you want the best possible chance of obtaining an unrestricted medical certificate, you must make sure that you arrange a test that follows FAA regulations.

It is therefore important to be aware of these tests and refer back to this page.