The cost to become a commercial airline pilot can be a significant one – up to $80,000 in fact when you include tuition and equipment costs like aviation headsets, flight bags, and aviation handheld radios.

Thankfully, becoming an airline pilot isn’t limited to just the privileged few, though.

Airlines offer aspiring pilots scholarships and tuition reimbursement programs that can help offset the high cost of training to become an airline pilot.

While an airline won’t completely pay for flight training, you can expect to save anything from a couple of thousand dollars to $30,000.

10 Airlines That Pay for Flight Training

Most regional airlines offer some form of tuition reimbursement to lower the cost of flight training.

Here are ten of the most popular airlines that students have had very good experiences with:

There are a number of fully sponsored pilot training programs available.

Getting an airline to pay for flight training isn’t usually quite as simple as enrolling in a flight school and receiving a check every month.

This even includes enrolling in the best online ground schools.

Airlines partner and are affiliated with specific flight schools that create a carefully choreographed flight training program, so you can gain all the necessary skills and knowledge required of safe and competent airline pilots.

This includes working as a Flight Instructor once your instruction has finished.

Additionally, a flight school that has partnered with an airline also makes the prospect of getting hired much simpler.

Interestingly, in 2020 United Airlines took the unique step of purchasing a flight-training academy in order to have more direction over recruitment, development, and training.

The academy is an extension of the airline’s Aviate program, which aims to hire more than 10,000 pilots in the next decade. 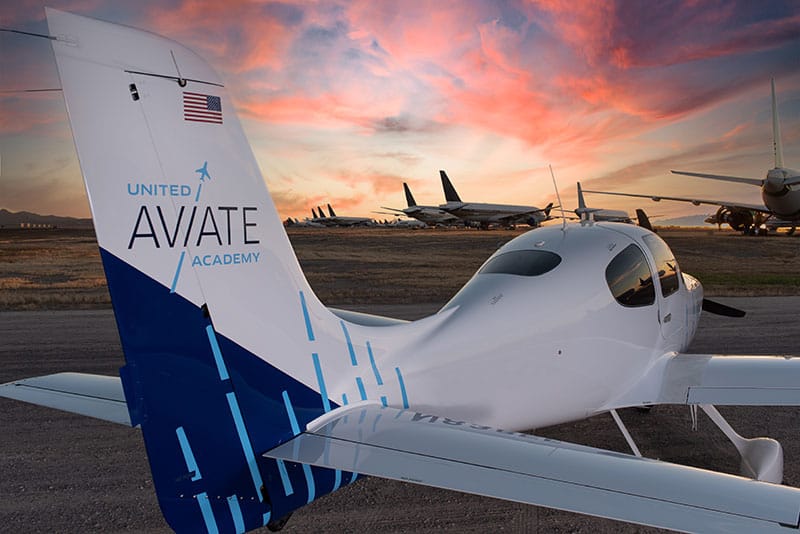 We wouldn’t be surprised if other airlines followed suit in the coming years, along with an emphasis on encouraging women and minority candidates to apply through scholarship programs.

Fast Track to the Major Airlines

It’s typical for regional airlines to have contractual flow-through agreements, which means that once you have met all the requirements, you will transfer directly to the major airline.

As most pilots who want to fly as a career have the ultimate goal of becoming an international airline pilot, this can be a hugely appealing prospect.

So with the obvious benefit of an airline contributing towards the cost of your flight training, as well as getting hired more easily, and having a very clear path to the majors, surely you should do everything in your power to enroll in an airline-sponsored flight training program. It’s a no-brainer, right?

In many cases, it really is a great opportunity. But remember that airlines will expect certain conditions to be met.

One of these is that you are usually expected to work as a Flight Instructor with the flight school you enrolled in to accrue the necessary hours required of airline pilots too (1,500 Rule).

You might therefore not have the option to take on other commercial pilot roles.