If you want to bring your dog on a plane, you probably have a lot of questions, including just exactly where dogs go on the plane and if it is safe and comfortable for them.

Dogs usually go into the cargo hold during a flight, though it is possible to also bring a dog with you into the cabin in a pet carrier.

Your dog must be in an approved pet carrier or crate on a flight, and the airline may provide you with either one if requested.

You cannot buy an extra seat for your dog. And you’re not allowed to release your dog from its carrier if it is in the main cabin, either.

Most airlines also charge you extra for bringing dogs and other pets. These additional charges will likely range in the hundreds of dollars.

Dogs and other pets are place in part of the plane’s cargo area underneath the cabin.

The cargo has the same temperature and pressure as the cabin for all animal’s well-being, including dogs.

What Are Dogs Placed in During a Flight?

The International Aviation Transport Authority (IATA) specifies that dogs must be placed in carriers with enough room for them to stand up, turn around, and lie down.

The carriers can be made from plastic, wood, or other appropriate materials.

The carrier must also have a water bowl and funnel for pet travel.

Some airlines will provide pet carriers themselves, while others require you to bring your own.

If you have a large dog, you may need to request a large wooden crate.

Can You Buy Your Dog a Seat on a Plane?

You can’t buy an extra seat for your dog.

At most, you can store your pet in a pet carrier in the cabin.

Are Dogs Allowed to Be Placed in the Cabin?

Dogs are not generally allowed in the cabin with passengers.

Some airlines may permit you to bring your dog in a pet carrier onboard if stored safely as a carry-on pet.

In any case, you can’t let your pet wander freely in the cabin.

How Much Does it Cost to Fly With a Dog?

Most airlines charge a fixed fee for pets, ranging from $50 to $250 per flight.

Depending on your airline’s policy, you may also be charged the following fees.

Is There a Weight Limit for Bringing a Dog on a Plane?

Most airlines won’t allow a dog that weighs more than 20 pounds into the cabin.

As for the cargo bay, most airlines don’t have a weight limit as long as the dog is in a suitable carrier.

Does Anyone Monitor Dogs on the Plane?

No one monitors dogs or other pets during a flight.

Unfortunately, there have been many instances of cats and dogs being malnourished during flights or suffering from strokes and injuries.

Some airlines may have cameras in their cargo holds to monitor pets, but this practice is not universal.

Can Dogs Eat and Drink on the Flight?

Dogs are provided a bowl of water or ice to prevent dehydration, but they’re not given food.

For long flights, pets are sometimes fed during the layover period.

For How Long Can Dogs Fly on a Plane?

Most airlines don’t allow dogs on a flight longer than 8 hours.

Some airlines will have different limits, though, and allow a dog on flights that are over 12 hours.

Generally, taking a dog with you on a flight longer than 12 hours is inadvisable.

It’s better to choose a flight with a layover instead.

How Do Dogs Go Potty on a Plane?

Dogs cannot go to the bathroom on long flights.

Passengers are required to limit their pets’ water intake 18 to 24 hours before the flight.

At most, passengers can place pee or poop pads on the carrier’s flooring.

Is it Stressful for Dogs to Fly?

Flying is extremely stressful for dogs, especially for elderly dogs and young pups.

You should provide suitable training to your dog to ensure they experience less stress while flying.

Is it Dangerous for Dogs to Fly?

Flying is generally as safe for your dog as it is for yourself.

Pets do need a health certificate issued by a veterinarian a week before travel to ensure they can fly, though.

Do Dogs Ears Hurt When Flying?

Dog ears are as vulnerable to high altitudes as human ears.

So yes, dog ears hurt just like human ears if they’re not equalized.

Luckily, dogs’ outer ear canals naturally equalize pressure in their ears. So the pain will pass quickly within a few minutes for most dogs.

See Also: How to Protect Your Dog’s Hearing While Flying 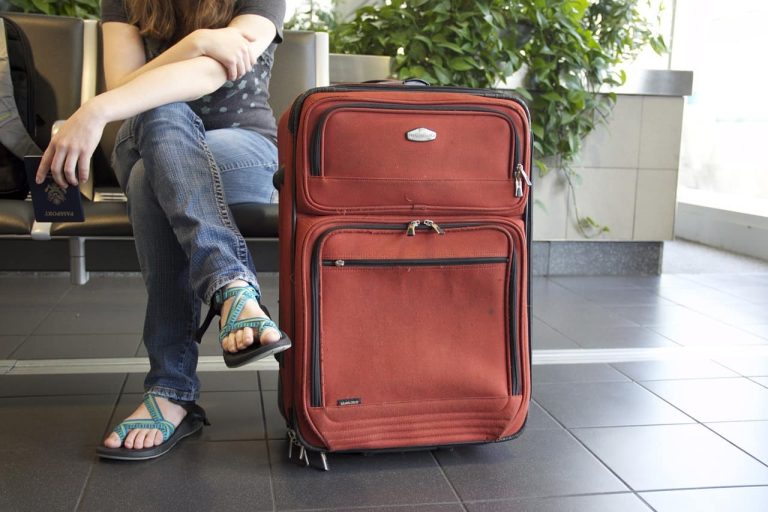